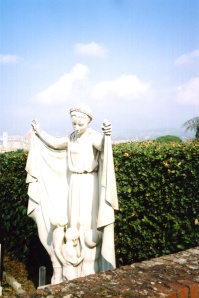 Italy is clearly the best country in which to go looking for miracles; it’s teeming with them. But you can find them in lots of other places, too. Of course, miracles don’t necessarily lead to sainthood, not by any means. Attaining sainthood is not easily accomplished and involves an arduous process with pitfalls along the way. Here’s a quick synopsis of what’s involved:

A bishop investigates your life and writings, looking for evidence of extraordinary virtue. If found, this information is communicated to the Vatican. Then a panel of theologians and the cardinals of the Congregation for Cause of Saints evaluates the details submitted. If it deems you worthy, it makes a recommendation to the pope who may then proclaim you venerable, i.e. a model of Catholic virtues.

Now comes the really tricky part. To become “beatified” and known as “blessed”, you have to be attributed with a posthumous miracle. You can get around this hurdle if you are a martyr who died for the faith, since in such instances you can be beatified without evidence of a miracle. But with just one you’re still not there. To be eligible for sainthood, there must be evidence of a second miracle, and it, too, must be posthumous!

But all this uncertainty about miracles leading to sainthood certainly shouldn’t stand in the way of your enjoying them wherever you encounter them in your travels. 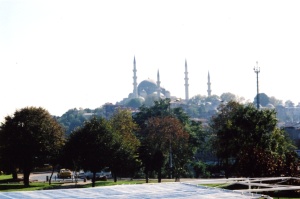 On a recent trip to Turkey we came upon three that we found quite intriguing. The first was in the Aya Sofya in Istanbul. Completed in A.D. 537, it was the world’s largest and most important Christian monument until the construction of St. Peter’s in Rome in the seventeenth century. In 1453, with the city’s conquest by Mehmet II, it was converted to a mosque and then, in 1936 when Kemal Ataturk turned Turkey into a secular republic, it was preserved simply as a museum. In the north aisle as you enter through the main door, there is a marble and brass column that was blessed by St. Gregory, the Miracle Worker. It is known as “the weeping column,” for water oozes from it–water that can work miracles. So many believers have pawed the column over the centuries, hoping that their hands will become moist, that they have worn a hole in the column. If you place your thumb in this hole and turn your hand 360 degrees, you will be cured of any specified ailments, but only if your finger emerges damp. We gave it a go. No luck. But then we weren’t suffering from any particular ailments either!

Later, after visiting the glorious Roman ruins of Ephesus, we walked to the Cave of the Seven Sleepers in the hills outside the town of Selcuk. It was here, during the persecution of the Roman emperor, Decius, in the second century A.D., that seven young Christian men were sealed into a cave and left to die. It was some 200 years later that a farmer happened to open the cave and found the men alive, but, of course, now very old and fast asleep. After he awakened them, they set off for Ephesus where they shocked the townsfolk with their ancient clothing and the old coins with which they attempted to buy some food.

I climbed onto a shelf, maybe five feet long, that was cut into the rocks and stretched out as best I could. Was this the bed of one of the seven sleepers? I don’t know. But I didn’t lie there long. I was afraid of nodding off!

Late that afternoon, I persuaded Dot that we should make yet another expedition in search of miracles: to the House of the Virgin Mary. So we hired a taxi that took us seven kilometres up a winding mountain road to a modest stone building where Mary reputedly spent her last days. She is supposed to have travelled to Ephesus with St. John who is himself apparently buried in Selcuk beneath the ruins of the basilica built in his name. Ultimately, she repaired to this house high in the hills above Selcuk. How do we know? Well, in the nineteenth century a bedridden German nun had a vision that revealed to her every detail of Mary’s house, including its exact location. And that is apparently where the simple edifice was subsequently uncovered.

It was late in the afternoon when we arrived at the shrine so the busloads of pilgrims and tourists had all left, and only a handful of people were walking along a manicured pathway in a park-like setting to the house. Just below it, we spotted a long, stone wall plastered with pieces of white cloth to which pilgrims had attached devotional messages to the Virgin Mary. Their numbers were a testament to the hordes of people who come to this hallowed place of pilgrimage.

Hmmm, we think. It was a long uphill trek from Ephesus for a frail, eldery lady. But three popes, including the current one, have visited the shrine, so surely the house is authentic. Back home, a friend who is an Anglican theologian, specializing in early Christian history, assures me there’s no way that Mary and St. John were in Ephesus together and that the house is Mary’s last resting place. He cites a number of facts to repudiate the claim.

Me, I rather like the story, especially the bit about the bedridden nun whose vision miraculously led to the uncovering of Mary’s house. Why spoil it all with reasoned academic argument? Travelling to the sites of miracles is fun. It’s a way to see the world through different eyes–with eyebrows lifted perhaps, just a touch!

author of travel/food books and popular fiction
View all posts by t. a. keenleyside →
This entry was posted in books, travel books and tagged churches, Italy, miracles, travel literature, Turkey. Bookmark the permalink.