In the novel, In A Spin, cottage life plays a role in dramatizing the differences in character between the two principal couples in the story. For Max and Carol Telford relaxing in the summer at their rustic island retreat on Georgian Bay is one of their most pleasurable annual pursuits. Henry and Joanne Peterson, on the other hand, are urban people whose preference would be for a cottage with all the comforts and amenities of home that just happens to be on a placid lake. So when the Petersons visit the Telfords’ cottage, it is not particularly to their liking. This difference in outlook is, however, simply a manifestation of other, underlying personality variations that keep them from becoming closer friends than they already are. As a result, when Henry ends up exposed to public ridicule and embarrassment because of his benign, but unusual behaviour, Max feels guilty, believing that, had he got to know Henry even better than he does, he might have been able to help him prevent the humiliation he suffers, or at least have served as a better source of comfort.

…for the Petersons there was a lot to adjust to at the Telfords’ cottage, and they couldn’t fully grasp the hold it had on Max and Carol. There was no beach for swimming. You had to plunge straight into the water from the rocks. Cold water, not like their heated pool. “Lake Erie’s never this bad,” Henry complained. No floats either to warn you where the water was deep, no comforting painted lines on the bottom, no chlorine. After one dip, Henry didn’t swim again, and Joanne always dove in and out with the speed of an osprey. There was no garden on the island either, just scattered clusters of daisies and black-eyed Susans. There was no lawn, just clumps of moss with tall tufts of feathery grass. Nothing to mow, nothing to get pissed off at Vern and Cybil for leaving unkempt. By nature, everything was unkempt.

When they took the outboard to undeveloped islands for a picnic, there were no benches or chairs, and they had to sit on the rocks, their sandwiches and beers spread out on bathing towels and cooler tops. Ants crawled inside their shorts. Even the food the Telfords ate was different, for Henry especially: muesli for breakfast, never fried eggs and bacon; at lunch salmon and tuna fish sandwiches on whole wheat bread, never hot dogs nor flat meats on white. Sometimes yellow and grey gooey “gork” that came in plastic containers. “What did you say this is called? Homos? Bubba who?” For dinner, a lot of pastas and stir-fried vegetables. No burgers or spareribs and only one steak. “I guess it’s hard to get good red meat up here, eh?”

There was no place nearby to go shopping either. No bar for a beer and tacos. No television even, no video games. Only a radio not strong enough to pick up the Tigers and with so much static it was hardly worth listening to the Jays. “So what do you do all day anyway?” Henry asked at regular intervals.

“Pretty much. Pick blueberries in season. And raspberries.”

Henry set to work replacing the rotting boards on the Telfords’ dock and pulling out loose and rusty nails. He also repaired two screens on the porch and planed the kitchen door which scraped against the floor. By the fifth day, however, he had run out of chores and

was so bored that Max had to drive him to Parry Sound to visit the Bobby Orr Community Centre. For Henry that was the best part of the holiday, and for years afterwards he talked about the awe he felt walking inside the arena. “Max, I felt I was near to greatness, to what defines us all, know what I mean? No question about it he was the best. Ever.”

It wasn’t really that bad a vacation. It was just that those two weeks at Sans Souci magnified the differences between Henry and Joanne and Max and Carol. But they were there all along anyway…

To read more you can order a copy of In A Spin by going to: http://www.borealispress.com. Or, for a personal, autographed copy, contact the author at: terdotcomm@sympatico.ca. 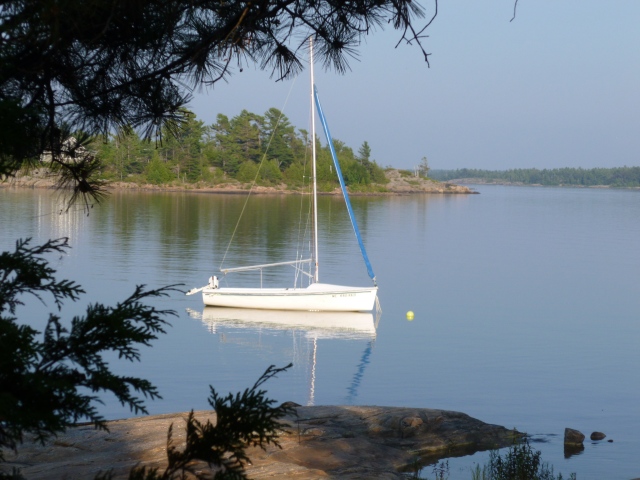