Roaming the big land from east to west, the birthday journey starts in Newfoundland, with excerpts from the chapter, “Salty People:”

Dot and I fly into St. John’s through a storm, sitting in the tail of the plane. As we approach the airport out of thick grey clouds, the steep, barren cliffs of the Avalon Peninsula suddenly materialize, an unbroken, undulating shield of rock protecting the interior from waterborne intruders–though not from airborne “round-trippers” like us, who have come for a look at the oldest settled region of Canada’s youngest province. The plane’s tail gyrates like a new, untested midway ride as we drop low over the runway, and the ninety-kilometre-an-hour wind adds a new, terrifying twist to our final descent as we slam hard onto the tarmac, rain splattering against the windows…

“Welcome to Newfoundland,” Mary says as she greets us at our bed and breakfast…”

“Good to be here. I didn’t think we were going to make it, the way we were tossed about.”

“Ah, everybody has to take a swipe at us, even the south wind. That’s what it’s like living on a rock in the middle of the Atlantic.” Fog, wind and rain–they define St. John’s as much as cod tongues and scruncheons. The local hockey team wasn’t named the St. John’s Fog Devils for nothing. And now I really do believe that in the great gale of 1846 the St. Thomas Garrison Church moved six inches on its foundation.

Unlike Charleston, with its famous “rainbow row” of colourful yet elegant harbourfront homes, there is no official stretch of jelly beans in St. John’s, but the houses, street after street of them, paint the hill in bright pigments that contrast starkly with the surrounding barren cliffs, lending the city a warmth that matches the character of its people. In the distance we can see the bald slopes of Signal Hill and the Cabot Tower. We gaze in awe out to the open Atlantic through a small gap in the cliffs. John Cabot (perhaps), Captain James Cook, Horatio Nelson, and Captain Bligh all sailed through these narrows. During the Second World War 10,000 merchant ships entered the protected waters of the harbour via this passage, naval escorts made 6,000 trips in and out of St. John’s…”When we got to Newfy John,” the sailors used to say, “we were coming home…”

I’m studying the provincial map now, trying to decide where we should go to get some sense of life in the outports. But how to choose from the legion of enticing places that say so much about the history and character of Newfoundland and Labrador? There are some that are simply fanciful, like Venison Tickle, Parson’s Pond, Sop’s Arm, Lushes Bight…Dildo Run, Hares Ears Point, and Jerry’s Nose. Others speak of hardship, tragedy, and misadventure: Cape White Handkerchief, Deadman’s Cove, Confusion Bay…Snakes Bight, Blow Me Down, Hungry Hill…and Job’s Cove. Still others have an optimistic ring: Hopedale, Fortune Harbour, Little Paradise…and Heart’s Desire. And finally there are names that are wonderfully ambiguous, like Comfort Bight, Little Seldom, Low Point, and, everyone’s favourite, Come by Chance…

…we hike from Bauline East along the coastal trail to La Manche. The stony path takes us through woods of balsam and elderberry until at last it reaches the coast again, and spectacular views unfold to the sea far below us. We descend the wrinkled slope by wooden steps to a suspension bridge 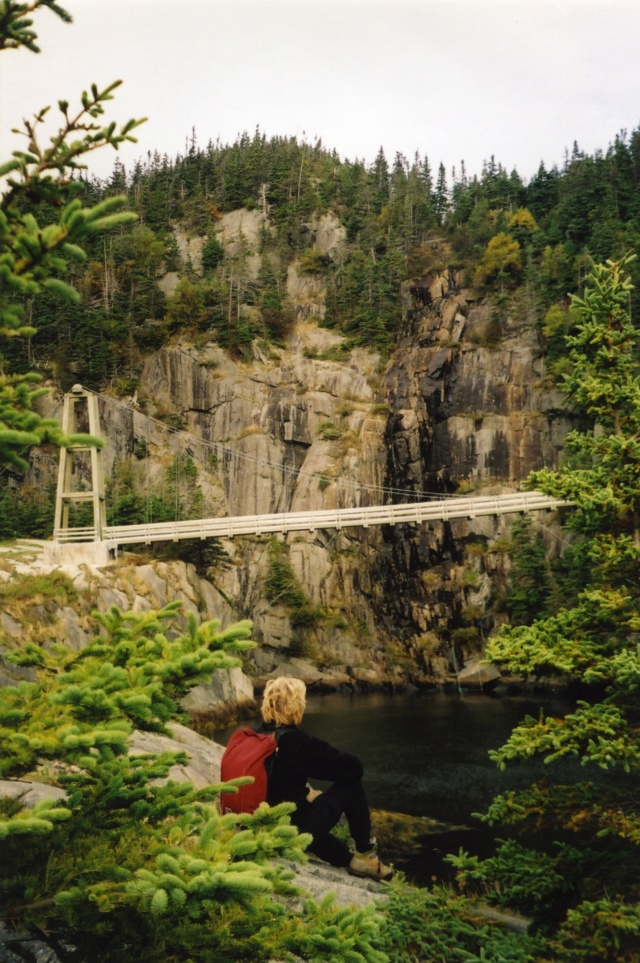 over the La Manche River, where, at last, much to our surprise, we arrive in a deserted outport. In January, 1966, huge waves destroyed the suspension bridge that linked the village to Bauline East, and all the residents were resettled. Now all that remains is the stone foundations of their homes, perched on the cliffs in grassy clearings overlooking the narrow mouth of the river. It’s an eerie site, and for us a moving glimps of the isolation and hardships of outport life in days gone by. In 1999, the East Coast Trail Association built a new suspension bridge to link La Manche once more with the villages to the north. Beside it is a plaque with a simple quotation from the Scottish poet Thomas A. Clark: “There are things we will never see, unless we walk to them.” True of Newfoundland. True for all of Canada.

The recipes in this chapter are for “Jiggs’ Dinner” and “Spicy Cod.”

Roaming The Big Land is available from Penumbra Press at www.penumbrapress.com.