Flat red and brown sand beaches run along the eastern coast of New Brunswick like a soft, broad highway from Charlo on Chaleur Bay to the Confederation Bridge on Northumberland Strait. In the official guidebook, these shallow shores of the gulf are described as having the warmest water north of Virginia, and this boast is repeated five times in the ensuing pages, lest anyone doubt the joys of a New Brunswick summer vacation. As we amble one stretch of this shore, I watch sandpipers scutter at the edge of small, curling waves, which, as they break, form chains of white foam that chug earnestly down the beach…miniature reminders of the locomotives that once steamed through the endless spruce forests of the New Brunswick interior. But it is the seagulls flitting above the beach that particularly grab my attention. They put me in mind 0f…Richard Hatfield’s years in office…I am thinking of the futuristic, gull-winged sports car his government financed to the tune of twenty-three million dollars in a vain effort to bring new industry to New Brunswick and help diversify its economy…

Ironically, Premier Hatfield brought a crate of fresh Atlantic salmon to New York with him for a dinner at the unveiling–a product that was symbolic of New Brunswick’s and the Maritime’s dependence on resources, the very condition the Bricklin was intended to help overcome. Wild salmon are in trouble now, too, but they have lasted much longer than the glitzy Bricklin, which fluttered to ground in September 1975, when the company went into receivership…

…we take an isolated road from Doaktown to Bouctouche, back on New Brunswick’s coast…At the intersections of Highways 116 and 126…we come upon several vehicles parked at the side of the road. A cluster of men is gathered around a makeshift stand with several dozen birchbark horns about fifteen inches long hanging from it. We approach the garrulous, moustached vendor, an Acadian dressed in an old camouflage jacket and green pants. They’re moose horns, we learn. Business is brisk, because next week is the annual three-day hunt. 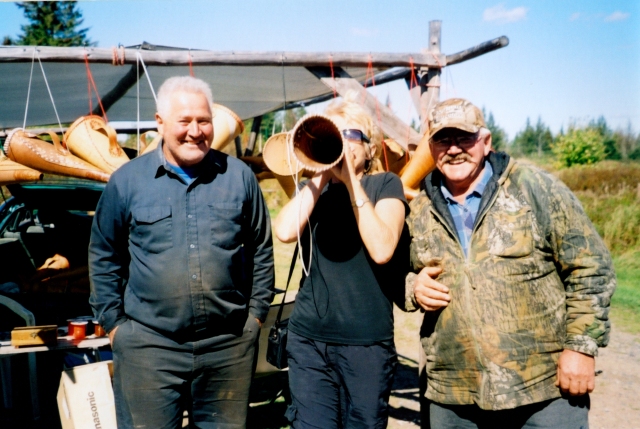 “Here, try one,” the vendor says, and Dot blows gustily, but she produces nothing a moose could possibly mistake for anything other than heavy human breathing.

“You’ve gotta blow like you’re taking a hard shit,” the man explains. Dot tries again and does manage what might pass as the call of a very sick animal. “I sell them to people from all over. I sold one to this guy from England. Next year he comes back. I see him crossing the road, looking mad. ‘That horn you sold me, it’s no fucking good,’ he says to me, and then he grins. Like, there’s no moose in England, eh!”

We’re at Bouctouche now, not far from Petitcodiac. This is the birthplace of New Brunswick’s most famous industrialist, K.C. Irving, who, starting with a car dealership and gasoline bar, built a giant energy, lumber, and media empire. Our destination is the nearby La Dune de Bouctouche, a twelve-kilometre-long sand dune that stretches down the coast and shelters behind it a salt marsh that ‘s rich in flora and fauna. The entire dune is part of the Irving Ecological Centre, a provincial park developed by the family’s commercial empire, which began in the region…Walking along this gift from the Irvings, I’m reminded that New Brunswick’s economic history is not all about fish, lumber, and failed industrial projects. Oil refining in Saint John is one of the big engines of the provincial economy today, courtesy of K.C. and his successors.

Still, it’s Richard Hatfield I’m thinking about again, even as I enjoy this ecological legacy of the Irvings…As the Bricklin fiasco showed, he dared to dream and to dream big. I even like the fact that in the most serious of the scandals that brought him down he wasn’t just busted for possession of marijuana, but for having it in his luggage as he boarded a plane he was to share with the Queen and Prince Philip. Hatfield didn’t do things quietly and carefully. He was open, imaginative, and bold. He had faults, but he also had sass and class!

The recipes accompanying this chapter are: “Home-Smoked Salmon”; “Smoked Salmon Pasta”; and “Fiddleheads.”

To purchase a copy of Roaming The Big Land, please visit: www.penumbrapress.com