Interested in taking an inexpensive trip to the Yukon, Northwest Territories and Nunavut?

Then come to the Downsview branch of the Toronto Public Library on Thursday, May 10, 2012 at 1.00 p.m. and travel to the three territories vicariously. Your tour guide will be author, T.A. Keenleyside, who will take you on this journey in both words and pictures.

Complimentary jars of marmalade and mustard from recipes in Roaming the Big Land: Flavours of Canada will be available for those who purchase personally autographed copies the book, offered for the occasion at the special price of $20.

You may register in person at the library or by calling 416-395-5720, or emailing: doprograms@torontopubliclibrary.ca

“What I remember most about that evening is not our meal of charbroiled Yukon king salmon, but the verse by Robert W. Service that was inscribed on the wall of an abandoned store across the road from Kate’s, and I recite it to myself on the plane as I gaze fondly at my poke:

I wanted the gold, and I sought it;

I wanted the gold and I got it–

Came out with a fortune last fall,–

Yet somehow life’s not what I thought it,

And somehow the gold isn’t all.

No, it really isn’t. Not for anybody. It’s about getting in and getting out. It’s all about the trek. (“Trekking for Gold” in Roaming the Big Land: Flavours of Canada).

“I drive a team of six across small lakes and through undulating scrub forest to a wilderness camp seven kilometres away….Whenever there’s an apparent problem and we slow down, the lead dog turns and gives me what I take to be a disapproving look, as if he’s thinking “Where the hell did they recruit this guy?” Never mind. Biting wind and tingling toes aside, I’m having the time of my life. I’m living a boyhood dream. I’m Constable King of the RCMP, and I’m hot on the trail of the Mad Trapper of Rat River.” (“North of Sixty” in Roaming the Big Land: Flavours of Canada). 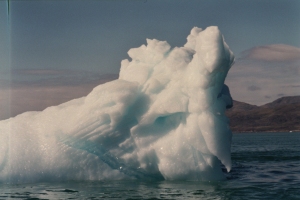 “It’s a transcendental experience. We’re actually standing on an iceberg on a vast, empty, and silent sea….drifting slowly southward toward Hudson Strait and Labrador, on ice that has presumably broken away from the massive, melting shelf on Greenland. We’re not that far in time and distrance from the nineteen men, women, and children, including several Inuit, who floated down Davis Strait past Cumberland Sound in 1872, trapped on an ice floe for 196 days….they travelled 2,400 kilometres before being rescued in the open Atlantic off Labrador.” (“Of Limits Unknown” in Roaming the Big Land: Flavours of Canada).

Can’t make it to the Downsview Public Library? You can always buy a copy of Roaming the Big Land: Flavours of Canada at: www.penumbrapress.com.

author of travel/food books and popular fiction
View all posts by t. a. keenleyside →
This entry was posted in Uncategorized and tagged food, Northwest Territories, Nunavut, recipes, travel, Yukon. Bookmark the permalink.