The Battles of Quidditch and Trafalgar

It is safe to say that before a recent trip to southwest Spain, our grandsons were more familiar with airborne battles on broomsticks as in the game of Quidditch than they were with historic conflicts at sea involving the British navy. For them, Harry Potter was already a beloved hero, while Horatio Nelson was a name they had never heard. Travel is, however, a great teacher and the boys are inveterate, unflagging trippers, always open to new experiences and to broadening their knowledge of the real world as well as the imagined. 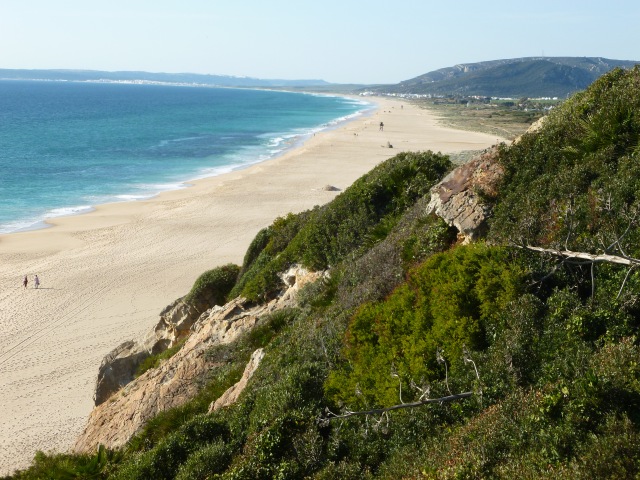 Spring is a perfect time to visit southwest Spain. The coast and charming villages of the interior are uncrowded; you can choose almost any restaurant for lunch or dinner without worrying about reservations. Equally important, it is a time of year when you can easily find tables on patios while sun, rather than shade, is what you are yearning for.

This corner of Spain also has the advantage of being largely overlooked by tourists from northern Europe who prefer the warmer Mediterranean coast to the beaches of the open Atlantic, so the prospects are much better of being surrounded by Spaniards than foreigners on vacation and thus of enjoying an authentically Spanish experience.

On a trip to southern Spain, we made the small, fishing community of Zahara de los Atunes–famous for its Atlantic bluefin tuna–our base for exploring the surrounding region. It proved to be a beautiful location for exposing our grandsons not only to Spanish culture, but to British history and to the exploits of Lord Horatio Nelson.

To the east, an hour and a half away by car, there was Gibraltar for them to visit, the site of Nelson’s Anchorage where, after the Battle of Trafalgar, the admiral’s body was brought ashore from HMS Victory, allegedly preserved in a barrel of rum. Here, in this community seemingly as British as any south coast English seaside town, our grandsons also learned of Gibraltar’s status as an outpost of the

empire from 1713 onward, and of the on-going friction between Spain and Britain over its future. Here they climbed the Rock and met face to face the tailless Barbary macaques who, according to legend, will be there until the British leave Gibraltar. Further east, they walked the beach at Tarifa and gazed at the spot where the warm Mediterranean (on the left) meets the colder waters of  the  Atlantic Ocean.

Here, too, they watched with envy the hordes of kitesurfers and windsurfers flying along the shore of one of the world’s most famous beaches for these activities.

And from Tarifa, they were able to take a ferry across the Mediterranean for a brief visit to Africa and the port city of Tangier, once a fashionable destination for the famous and the wealthy before it was displaced by Gibraltar as a tax-free haven and shopping destination. 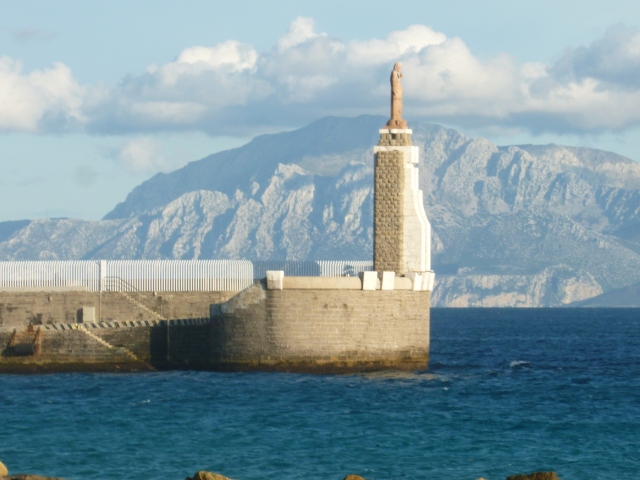 One day in North Africa was enough to whet their appetites for future exploration of the continent and its varied cultures. Moving farther west, the boys were astounded by the height and breadth of the sand dunes at Punta Palma.

And at Bolonia as well. 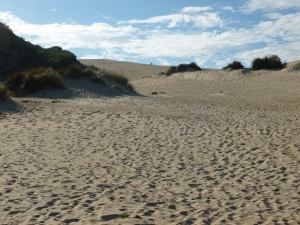 These coastal visits were followed by outings to the pueblo blanco–the white towns of the rugged, hilly interior: Arcos de la Frontera, a strategic clifftop village steeped in turbulent history and full of winding streets and colourful murals; 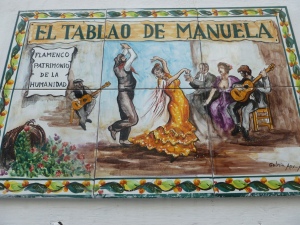 By now, the boys had asked the inevitable question as to why the names of so many towns included the word “frontera” and had come to understand how they were seeing what historically had been viewed as lonely, little-visited outposts of mighty Spain.

But, most interesting of all for our grandsons from an historic point of view was to return to the coast a little west of Zahara de los Atunes and hike from the beach at Barbate

on the east side of Cape Trafalgar to the village of Los Canos de Meca on the west to witness the site of Britain’s famous sea battle against the combined fleets of France and Spain. It was on October 21, 1805 that twenty-seven ships of the British Royal Navy decisively defeated a combined force of thirty-three French and Spanish ships of the line. Although heavily outnumbered and outgunned by the enemy, the British did not lose a single ship while France and Spain combined lost twenty-two. It was a victory that confirmed Britain’s naval supremacy for decades to come.

These are facts well known by British school children, but I wonder how many of them are aware of an interesting detail of the battle to which our grandchildren are now privy. It pertains to to the famous signal hoisted on Nelson’s ship Victory just before the battle commenced: “England expects that every man will do his duty.” Initially, Nelson had requested the wording “England confides” and ordered that the flags be raised quickly as he had another tactical message to follow. But his signaler requested permission to substitute “expects” for “confides”, since the word was in the ship’s inventory of flags and would not have to be spelled out, thus saving time. Lord Nelson concurred, ensuring that history has been left with a much more memorable quotation than would otherwise have been the case!

It is a lovely hike through a pine forest to the village of Los Canos de Meca on the far side of Cape Trafalgar. Midway along the path, you pass the 16th century Torre del Tajo with its stunning views across the Atlantic, but neither there nor anywhere along the route is there any mention of the famous naval battle that occurred in these waters. Looking down on Los Canos de Meca, you can see in the distance a lighthouse, on a spit of land. This is Cabo de Trafalgar, off which the battle actually occurred, and the lighthouse was the last glimpse of land that Nelson had before he succumbed to the bullet wound in his spine, inflicted by a French soldier firing on Victory from the ship, Redoutable.

After their trip to Spain, the grandsons had only a few hours between planes in London on their way home to British Columbia. But it was time enough to visit two sights they were eager to see: King’s Cross St. Pancras Station where Harry Potter and his chums dashed through the brick wall between Platforms 9 and 10 to arrive at Platform 9 3/4 for the Hogwarts Express to school, and Trafalgar Square with its monument to Lord Horatio Nelson, victor of the Battle of Trafalgar. Our grandsons have never revealed which impressed them more: looking quizzically at a brick wall with a luggage cart embedded in it at King’s Cross St. Pancras, or gazing at the grandeur of the Nelson Monument, towering over the historic square in which it stands in the centre of London. Now that they have visited Spain and looked down from Cape Trafalgar upon the sight of that famous battle, I have little doubt what their answer would be. Rule Britannia! Here’s to the rewards of travel in the real world!

For more travel stories, try one or more entertaining books by T.A, Keenleyside, available from: http://www.penumbrapress.com, or by contacting the author for a personally autographed copy: terdotcomm@sympatico.ca.