Wow! Just think of it: little Croatia, a country of barely four million people and an independent state for less than 37 years knocking off some of the great powers of football and, indeed, of global affairs, countries like Argentina, Russia, and even mighty England.  It is quite an achievement for a small, long-suffering country, bloodied by a vicious war for independence and subjected to protracted hardship and deprivation. Now it is winning on the relatively peaceful pitch of World Cup Football, beating even the founder of the game itself. Some might even describe Croatia’s current success as nothing less than a miracle.

But then Croatia, like so many European countries, is accustomed to miracles.

Dubrovnik, its most famous and stunningly beautiful city, was, after all, saved from an attack by Venetian galleys  in A.D. 971  only by a miracle wrought by St. Blaise, patron saint of the city. The Venetian ships had dropped anchor not far from the port city ostensibly to take on water, but with the real intent of scoping out Dubrovnik’s defences. Their plan of attack was revealed in a dream to a canon of the city’s St. Stephen’s Cathedral; a vision appeared before him  of the saint as an old man with a long beard, wearing a bishop’s mitre and carrying a staff. In just such garb, St. Blaise appears atop the church bearing his name in the very centre of Dubrovnik, for it was his warning to the canon that allegedly saved the city from the Venetians.

In front of the church is a stone column and

carved into it is the figure of a medieval knight, named Orlando. According to legend Orlando helped liberate Dubrovnik from a siege by Arab pirates in the eighth century, and the statue is accordingly a symbol of the freedom of the city; the flag of the republic always flies from the column on important festival days, such as February 3, the feast day of Blaise. That is the day when relics of the saint are paraded through the streets of Dubrovnik: his head, his hands, and fragments of bone from his throat.

Why the bits of bone one might ask? Well, Blaise started out as a doctor in Armenia in the fourth century, and pretty quickly he was performing medical miracles. Even wild animals purportedly came on their own to be healed by Blaise and some are said to have actually assisted him in his work. Eventually, he was made bishop of his home city of Sebaste in Armenia and his count of miracles rapidy climbed. But that lasted only until A.D. 316 when the Roman emperor ordered the killing of Christians in Armenia and Blaise was arrested. While on his way to jail, he was stopped by a desperate mother who beseechingly laid her only son at Blaise’s feet, choking to death on a fish bone. Instantly, the child was cured, although that did not save Blaise from being beheaded when he refused to renounce his faith.

So Saint Blaise is important to Dubrovnik not only in the defence of the city from enemies, but in protecting its citizens from choking, a reasuring fact in a seafaring city where, today,  grilled sea bass and sea bream do not always come filleted.

Seductive Dubrovnik is hard to leave, but there are other intriguing places to visit  along Croatia’s rugged coast. There is, for instance, Ston, famous for its oyster beds, salt pans, and defensive walls. Our guide, a battle-hardened veteran of the war of independence, informs us that it is the second longest such wall in the world after the Great Wall of China. It isn’t, but it is by most accounts at least the second longest in Europe. 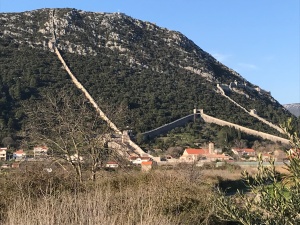 There is the island of Korcula, which many Croatians contend is the birthplace of Marco

Polo, although there is no concrete evidence to support this claim and the probability is that he was born in Venice. But who cares about these little exaggerations? Small countries need to boast a little, and, besides, there will be less of that now with Croatia’s World Cup success.

The little Elafiti Islands of Lopud, Kolocep and Sipan, still recovering from the ravages of the war of independence, are each worth a day outing by ferry from Dubrovnik.

And so is the town of Cavtat with its picturesque harbour

And curious pulpit in the Church of Our Lady of the Snow.

A little farther afield to the south once can venture into Montenegro, especially for a visit to the ancient city of Kotor, situated deep in an inlet from the sea, surrounded by bald, limestone peaks.

And to the northeast one can travel into Bosnia Herzegovina for a visit to Mostar. Here the scars of warfare remain abundant, even though most of the country’s mosques have now been rebuilt.

It is one of the ironies of the wars in the Balkans that at some locations you can catch sight at the same time of three different places of worship–mosques, Eastern Othodox and Roman Catholic Churches as the communities once again warily attempt to live side-by-side in peace and friendship.

It is, however, back to the allure of Dubrovnik that one is constantly drawn, for it is the crowning attraction of the entire region, and a two-hour walk around its walls the jewel in any visit.

We are in a sense lucky because it is mostly cold and wet during our stay in Dubrovnik, so traffic along the paths of the wall is light. Best not to visit the city in the height of the tourist season when it is so busy that the wall of this UNESCO World Heritage site often has to be closed to additional visitors. 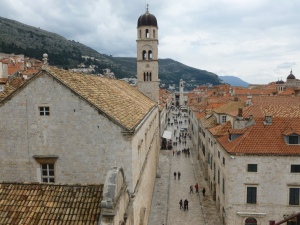 But with the weather so bad, we eventually run out of outdoor things to do in the city. It is at that point that I propose to the family a visit to the Franciscan Monastery which everyone has now seen from the wall. Our grandsons in particular receive this suggestion sceptically. Looking at holy relics, even ones that I assure them are likely to be goolish, does not really catch their fancy.

We are standing hesitantly at the entrance to the monastery and about to turn away when the custodian makes us an offer I can’t refuse: six admissions for the price of three. Good old St. Francis, I beam. It’s like the miracle of the umbrella that suddenly appeared on the ground before us when we were about to walk in the rain to the good saint’s place of meditation outside Assisi (see the post entitled “Looking for Miracles”).

The custodian’s generosity has, however, given me a mischievous idea. There is also a Dominican Monastery in Dubrovnik, and I’m intrigued to find out how the Dominicans will respond in head to head competition with the Franciscans in bestowing a favour. The next day it is still raining, but this time I sense that even our grandsons are curious to visit the Dominican Monastery and see what sort of saving their papa can wangle out of this illustrious order. Nothing as it turns out; I am obliged to fork out the full admission price for six. But as I do so, I tell the custodian that I taught for many years at the University of Windsor in Canada which, previously, had been Assumption University, founded by the Basilian Fathers. The two orders share a lot in common, I tell him, since both place supreme importance on education–and not just spiritual education–as a path leading to God. It was for that reason, I say to the custodian, that I thought he might entertain a reduction in the price of admission, since visiting the monastery would be important to my grandson’s education. “Ah!” the custodian laughs and gives me a wry smile. “If you’d told me that before you paid, I’d have admitted you for free!”

Dubrovnik is definitely worth a visit, but don’t expect a miraculous deal, not from the Dominicans at least!

For more travel tales and recipes from around the world, try one of the following books available from http://www.penumbrapress.com or from the author by emailing: terdotcomm@sympatico.ca.