Here’s an excerpt from At the Table, Nourishing Conversation and Food (Penumbra Press, 2012) on the subject of conversing with children at dinnertime: 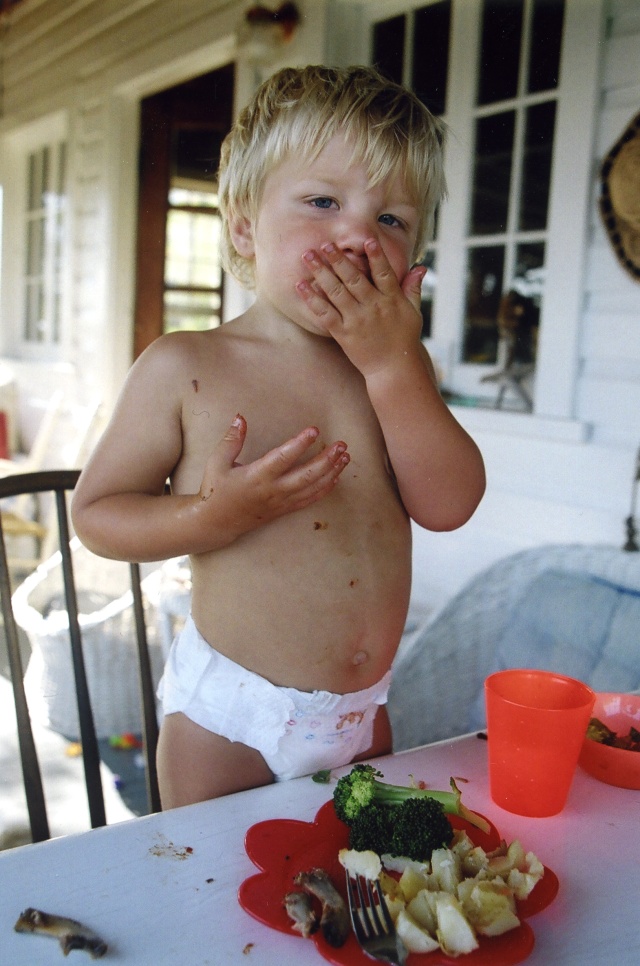 “Isto e chato,” Sam, seven, a demanding eater, complains–“This sucks” in Portuguese. It’s a phrase I taught him at March break, sitting at our glass-top dinner table in a villa we had rented in a remote corner of the Algarve. Teaching the boys rude expressions was, I figured, a good way to interest them in memorizing some basic Portuguese as well as keeping them happily engaged at the table. I was aware, too, of the study done at Harvard that disclosed that dinner with the family is more important in developing vocabulary in young kids than play, story time, and other family activities.

His lips curl like wood shavings and his chin droops onto his chest, the blond fringe of his hair touching his plate. “I hate salad.”

So now the conversation turns to other dinner tables that have been ours for several weeks on extended visits with friends, renting, or house-exchanging: one belonging to Sepp, our Austrian friend, in Damascus, where, the night we were preparing to leave on a trip to Jordan and Wadi Rum, I startled the servants by charging into the dining-room dressed as Lawrence of Arabia and waving a jewelled scabbard as I cried, “To Aqaba!”….

“Isto e chato,” an obstinate Sam says again. “Is there anything else to eat?”

“You haven’t even tried the salad yet,” says Deb. “What’s the matter? You ate all sorts of new things in Portugal.”

Tad chuckles at his son’s determined nature. “Remember the time at the cottage when Rod was putting in the new sink in the kitchen? I told Sam he couldn’t have eggs for breakfast because we all had to stay out of the kitchen, but that he could have them for lunch instead. ‘Okay,’ Sam said, ‘then I’ll have my lunch now!'”

“Where else would you learn such repartee if not around the table?” I say with a laugh. “You know an A.C. Nielsen poll disclosed that the average parent spends only thirty-eight and a half minutes per week in meaningful conversation with their children. No wonder, when apparently less than a third of kids sit down to eat dinner with both parents on any given night.”

(“Back Home,” in At the Table Nourishing Conversation and Food. Available from Penumbra Press: www.penumbrapress.com/book.php?id=360)